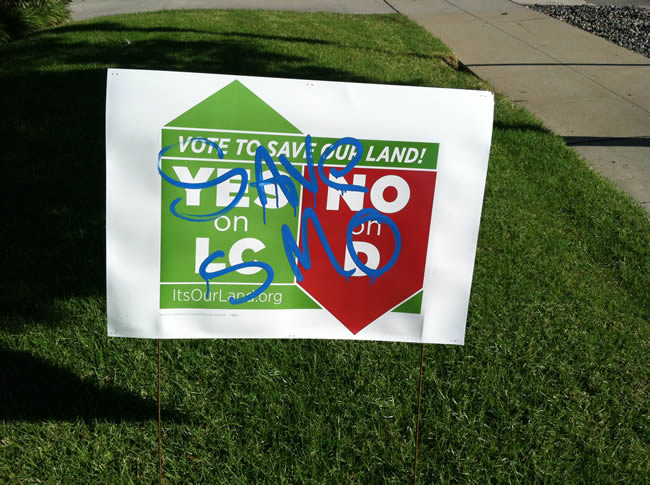 A Santa Monica resident has filed a vandalism report after her yard sign supporting Measure LC was defaced.

The sign originally said “Yes on LC, No on D.” Someone spray-painted the words “Save SMO” on the sign. That slogan is used by backers of Measure D, an aviation-industry backed effort to take control of city-owned Santa Monica Airport.

“This was clearly an effort to intimidate not just one resident, but anyone who challenges the aviation lobbies financing Measure D,” said John Fairweather, chair of the Committee for Local Control of Santa Monica Airport Land.

Measure LC guarantees that if SMO were to close, the city-owned land could only be used for low-density purposes: parks, playing fields, recreation areas, and cultural/educational facilities such as those currently on SMO’s campus.

Measure LC has been endorsed by the League of Women Voters, the Santa Monica Democratic Club, several neighborhood associations, SMRR, and every serious City Council candidate.