Measure D has been creating fear amongst voters by telling them that without Santa Monica Airport (SMO), large commercial aircraft heading into LAX from the north would come down and skim over Santa Monica at 2,500 feet in altitude. This is another false and deceptive fear tactic by the aviation lobbyist behind Measure D.

Today’s commercial aircraft flying into LAX from the north pass over Santa Monica at about 7,000 feet on their landing approach. Why this altitude? The reason is not to avoid SMO airspace. The SMO airspace is classified by the FAA as Class D and has a top elevation of only 2,500 feet.

So why do the LAX aircraft pass over Santa Monica at 7,000 feet? The reason is because of (1) the aircraft’s rate of descent and (2) its landing path which is largely driven by the east-west orientation of the LAX runways.

Aircraft at LAX land from the east and take off to the west over the Pacific Ocean. Aircraft coming in from the north do not head straight into LAX and land perpendicular to the runway. Instead, they come in from the coast over Santa Monica, head east over Downtown LA, and then make a U-turn and merge into the westbound landing approach in alignment with the east-west runway orientation:

The descent into LAX follows a Continuous Descent Approach (CDA). With the CDA approach, aircraft remain at their normal cruising altitude of about 35,000 feet to save fuel in the thinner air until they near the airport where they will land. With engines idling and the help of gravity, the aircraft descends gradually and smoothly, using less fuel to minimize costs. The standard Continuous Descent Approach is along a 3 degree decline, descending at about 1,400 feet per 5 miles: 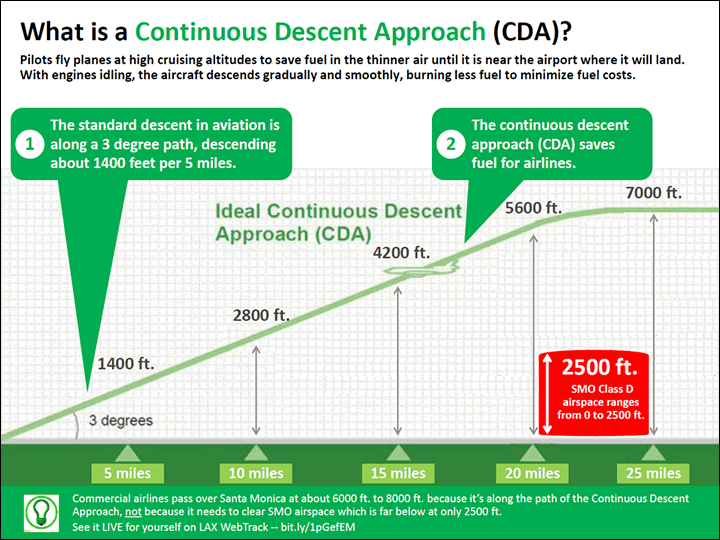 Along this trajectory of the LAX landing approach from the north, aircraft are at least 25 miles away from touchdown when they pass over Santa Monica. At 25 miles away on a Continuous Descent Approach, the aircraft are at altitudes of about 7,000 feet. Thus, the SMO airspace below, at just 2,500 feet, has no impact.

Anyone can watch this LIVE on LAX WebTrak. (Click on the Display tab at the bottom left and check “Aircraft Info Tags” to see the altitude. Also, you can click on “Historical,” and then replay it at faster speeds.)

Don’t believe the fear, uncertainty, and doubt from the Measure D campaign: Vote YES on LC, and NO on D.