Santa Monica College officials have denounced as “FALSE,” (their capitals) an ad by backers of Measure D that claims SMC is in talks to develop additional land at Santa Monica Airport.

The Measure D ad says, “SMC is already making deals for the (airport) land for a 4-year campus.” Supporters of Measure LC asked SMC about the ad’s claim.

The Measure D claim is “a 100 percent fabrication,” according to a statement issued by SMC’s Senior Director of Government Relations & Institutional Communications, Donald Girard. “SMC has not engaged and is not engaged with the City of Santa Monica, its staff, or any of its elected officials, in any discussion regarding additional use of lands at the Santa Monica Airport,” the statement says.

“The phony ad by the “D” backers is part of their six-month campaign of deception,” said John Fairweather, chair of the Committee for Local Control of Santa Monica Airport Land (Yes on LC, No on D).

The same ad claims that If LC wins, “seven politicians backed by development interests will begin immediately to redevelop 40 acres of airport land without voter approval.” In fact, no one knows what the makeup of the City Council will be after Election Day, Nov. 4, and the alleged redevelopment plan is unspecified in the ad because it’s nonexistent.

“What we do know is that every viable council candidate, incumbent and challenger, has said “Yes on LC, No on D,” as have the League of Women Voters of Santa Monica, the Sierra Club, the Residocracy advisory board, Santa Monica Coalition for a Livable City and many others,” Fairweather noted.

Measure LC guarantees that if – IF – flight activities at SMO ever ended, only low-density development such as parks, playing fields, recreational areas and cultural/educational facilities such as those already in place would be allowed on airport land. The City Council could not override this; only a vote of the people could do it. 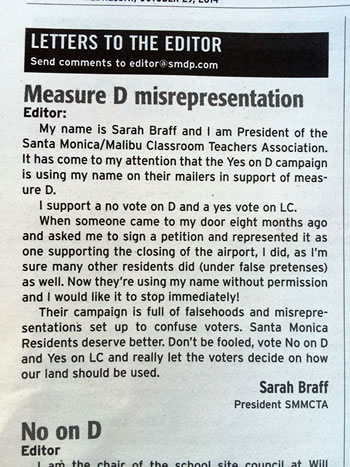 “D’s” phony ads are only part of the story. The president of the Santa Monica/Malibu Classroom Teachers Assn., Sarah Braff, is decrying the unethical use of her name in Measure D mailers, listing her as a supporter. In fact, she said, she supports LC and opposes D, calling the ”D” campaign “full of falsehoods and misrepresentations.”

Braff is among a number of LC supporters who have discovered their names unethically listed in such ads. The “D” campaign has refused to acknowledge this deceitful practice or apologize for it.

deception, Fear Uncertainty & Doubt, get the facts, no new development