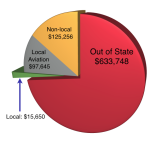 As of October 20, Measure D’s backers–primarily the National Business Aviation Association and the Aircraft Owners and Pilots Association–have raised $872,299 to support the deceptive Measure D. That money is mostly coming from outside of Santa Monica — indeed, only 2% of their funding is coming from local, non-aviation supporters. 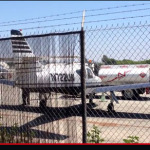 If Measure D passes, we will be prohibited from getting rid of lead fuel sales as long as the airport remains open. In contrast, Measure LC will allow us to address the issue of lead fuel sales and run our airport with the interests of our residents’ heath and safety in in mind. 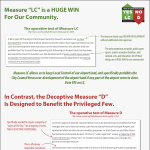 It all comes down to just a couple of paragraphs. Read the operative texts of Measures LC & D and then decide for yourself! 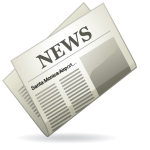 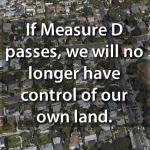 Measure D says that we would not be able to change any aviation use of the airport without first voting to close the airport. But if it passes, closing the airport will become all but impossible! 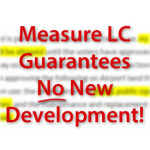 Measure LC would be a huge win for our community. If the airport ever closes, it would prevent the City Council and developers from doing anything with the land, except for turning it into public parks. 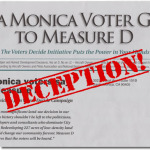 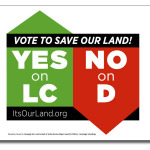 Want to display the Yes on LC, No on D logo in your window? Here are two PDFs you can download and print at home!

We’ve put together some graphics for you to add on your social media profiles, to make it easy for you to show your support for the Yes on LC, No on D campaign! 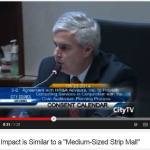 Measure D supporters claim the financial impact of Santa Monica Airport is far greater than it really is. Here’s City Manager Ron Gould saying that in reality, it’s only equivalent to a “medium-sized strip mall.”